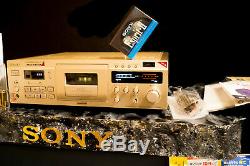 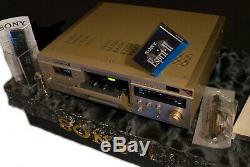 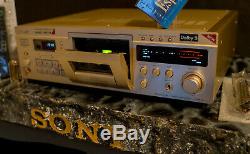 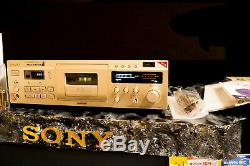 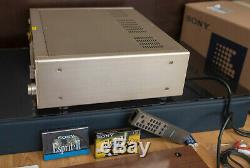 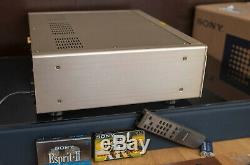 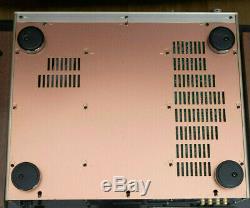 NEW GOLDEN SONY TC-KA7ES and GOLDEN REMOTE CONTROL + SIDE PANELS (optional) + ENGLISH MANUAL and 220/240V or 100v operation (100V upon request). This deck SONY TC-KA7ES is last and well build in Sony Cassettes decks , that collected all Sony's cassette decks engineering minds from 60s to 2000. All Sony decks ever build is inside this decks and only best and improved components in inside this deck.

No more was made after this one. This deck will beat all ever made Sony decks made in the past and many other brands. Any deck will require this check up.

Now its restored to zero , but not limited to and ready to go play / record and enjoy - I did not spot anything wrong on it. Please note - , again , because this was serviced its not untouched and might have traces or touch.

Again , its NEW and UNUSED and Working. I checked and recorded on video plenty commands on order to demonstrate this deck in recording / play / settings switch ect. My apology if this option not suits. SIDE PANELS ARE OPTIONAL , if you dont want those - please claim cheaper price.

This is bespoke pair , high gloss lacquered , comes with 8 extra screws. I never has been installed , on image I only lean to the sides of deck.

SONY ES 90min cassette and SONY METAL 90min are included for sale. Please contact me if you need this machine with 100V operation. This deck has accumulated everything from the ES series Sony designers from the two most successful decks TS-K777ES year 1982 to TS-K700es year 1986 and the classic super deck Tc-K990es Europe and best TC-KA555ESJ Japan.

All this decks with improved components or some components left the same was used to produce final SONY TC-KA7ES model. Here as well was use. Oxygen free copper with a purity of 99.997% even. A special word for head.

Generally, with a 3-head deck, the inductor (coil) is used to prevent the bias signal to be inserted via the play head during simultaneous recording and playback. However, while eliminating the bias signal, the inductor had an adverse effect on the sound quality because it is connected in series with the signal path. Therefore, the bias signal is effectively eliminated by adopting the active type GIC bias filter not through the coil or the capacitor in the signal path. The cassette stabilizer is carried and as soon as the tape is loaded in the mechanical deck, the stabilizer provided inside the cassette door securely holds the cassette half and suppresses vibration of the tape. Especially in the ES series, by adopting the new material Sorbossein for free action holding arm and stabilizer, it absorbs harmful vibration and prevents the generation of modulation noise.

Dolby HX Pro is carried and the over bias is prevented by controlling the effective bias amount to the optimum value in 1/1000 second increments, and the linearity of the treble region is raised. And DOLBY B C S noise reduction not seen. By adopting super bias, by widely shifting up the frequency of the bias signal, it widens the frequency difference from the audio signal, suppressing the occurrence of beat noise and intermodulation distortion due to mutual interference. Built-in oscillator (oscillator) has a bias calibration function that can fine-adjust the bias value within about ± 20% according to the tape to be used.

In addition, the recording level calibration function which eliminates the level difference between recording and reproduction by the tape sensitivity is carried. A coway cable excellent in durability is adopted as a power cable. This cable has a polarity indication and polarity matching with each component is possible.

It has an auto monitor function which simplified operation at playback, and automatically switches from the SOURCE position to the TAPE position when the play button is pressed. In addition, it is possible to select auto and manual. In addition to displaying the peak value of the music signal in real time, the peak level meter equipped with peak hold function is carried. Combined with adoption of 3-phase linear torque BSL motor with less rotational unevenness, stable tape running performance is secured. Zinc die casting (Berik) with high rigidity is adopted for the head base material which becomes the base of the head, eliminating unnecessary vibration and maintaining the azimuth precision accurately, it is possible to obtain good phase characteristic Is realized.

The zinc die-cast (beric) base of the monocoque structure is adopted as the base of the motor part, and the modulation noise generated by external vibration such as sound pressure is reduced. Moreover, by the integral structure of the motor part and the base, high precision and highly stable rotation performance is obtained. Capstans and pinch rollers are placed on both the take-up side and the supply side, centering on the tape head, and we adopt a closed-loop dual capstan system that stabilizes tape running. In order to protect the purity of the sound, the audio circuit is arranged in accordance with the signal flow as much as possible.

Furthermore, mutual interference is suppressed by arranging the recording amplifier and the playback amplifier on independent boards and arranging it in the upper and lower two stages. At the same time, it adopts the twin monaural DC amplifier configuration of all stages, and refuses interference between the channels. In addition, we are trying to improve the sound quality by strengthening the power supply section. The display mode switch is carried and it is possible to switch to 3 modes of all lighting, partial ON / OFF of the counter only. It carries AMS (automatic music sensor), and you can quickly search the beginning and the end of the previous and next songs.

The seller is "ikebana007" and is located in Dublin. This item can be shipped worldwide.